Pictures from a walk just before Christmas in the Hebden Bridge area. 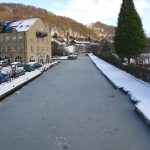 This has been a very cold winter.  Here the Rochdale canal through Hebden Bridge has frozen over.  Hebden Bridge, like many of the surrounding communities of West Yorkshire developed as the result of the Industrial Revolution.  These days the industry is long gone and the town has developed something of an artistic / alternative culture, and has the unusual distinction of having the largest population density of lesbians in UK. 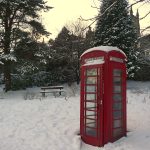 Old-style phone box in Heptonstall.  The hillside village of Heptonstall was the original settlement in this part of the upper Calder valley, until the development of the mills in Hebden Bridge and the draining of the marshy valley bottom. 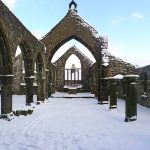 The old church in Heptonstall.  This was damaged in a gale in 1847.  Rather than being repaired, a new church was built next door! 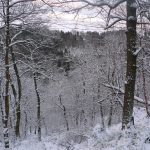 Trees in the snow. 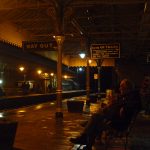 Hebden Bridge railway station has been restored to its original architecture and signage. 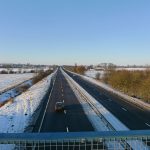 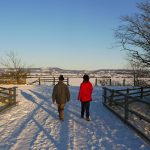 A couple of pictures from a Christmas Day walk (Thirsk), which explains the lack of cars on the A19!