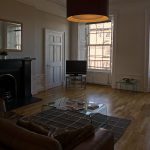 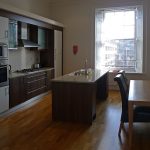 The serviced apartment we rented in North Charlotte Street [55 57 11 N, 3 12 25 W] was clearly aimed at the high-end rental market, but was much better value for money than any hotel room. 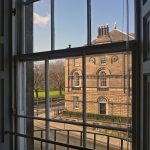 View from the window towards Charlotte Square – the First Minister‘s residence is at number 6. 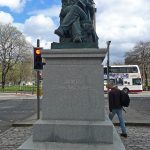 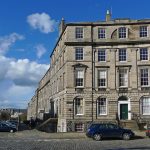 Pictures from Edinburgh’s New Town: (L) statue commemorating the Scottish physicist James Clerk Maxwell, (R) typical neo-classical architecture of the New Town, looking down Scotland Street [55 57 33 N, 3 11 40 W].  The New Town was built over a period of nearly 100 years from 1765 in response to the overcrowding of the historic heart of Edinburgh, the Old Town. 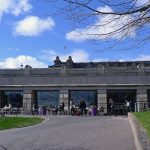 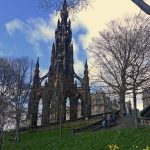 The unmistakeably Gothic Scott Monument off Princes Street, with the quintessential Edinburgh department store, Jenners, in the background. 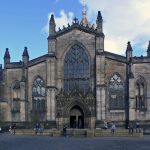 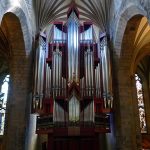 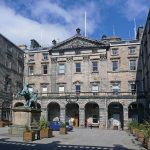 The City Chambers are built over sealed off streets of houses (“closes”) that led down from the Royal Mile to the fetid shallow lake that was the Nor Loch (before this was drained to form Princes Street Gardens).  The preserved remains of the closes, most notably Mary King’s Close, are now a tourist attraction. 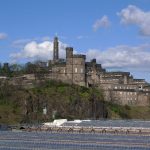 Looking over the roof of Waverley railway station (which resembles a set of greenhouses) towards Calton Hill.  The buildings of St. Andrew’s House (the headquarters of the Scottish Government) have a rather sinister “fascist architecture” look about them. Note also the black “time ball” on the Nelson Monument behind. This is dropped at exactly 1 pm, coinciding with the firing of the One O’Clock Gun at the Castle.

Views from the Nelson Monument 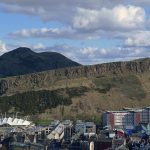 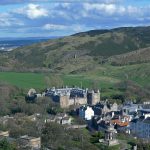 (L) South towards the extinct volcano of Arthur’s Seat. (R) towards Holyroodhouse (the Queen’s official residence in Scotland) and the adjacent ruined abbey. 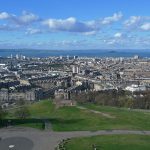 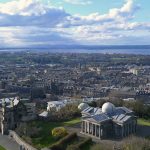 (L) North towards the port area of Leith and the Firth of Forth beyond. (R) North and west, with the tops of the Forth road and rail bridges just visible at the left. 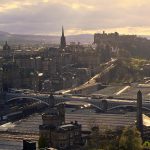 View over Princes Street and Waverley towards the Castle.